Monaco is the most important and prestigious automobile race in the world. Only the Le Mans 24 Hours and the Indianapolis 500 are in the same league. Today, it is the absolute epitome of glamour and excitement. The fact that the 2020 race has been cancelled tells you all you need to know about this extraordinary year of the Coronavirus pandemic. If Monaco is called off, then there is a major problem… But how did it happen? How did Monaco become such a vital part of Formula 1 ? People who haven’t been to the race complain that there is not enough overtaking, but those who have seen the race live have a different view. Monaco reminds everybody of the amazing skills of F1 drivers as they thread cars through the narrow streets at mind-bending speeds. A playground for the rich and adventurous for nearly 200 years, motor sport in Monaco dates back to the end of the 19 th Century. In 1897, Monaco was the destination for a road race from Marseille, and in the same year the Nice-La Turbie hillclimb was held for the first time. During that period, the Monaco cycling club added the word ‘automobile’ to its name and became the Sport Automobile et Velocipedique de Monaco (SAVM). The club elected Alexandre Noghes as its president and he argued that the Principality would really benefit from an international motoring event. He created the Monte Carlo Rally, an event that started in various cities around Europe with the cars converging on Monte Carlo and the winner decided based on the elegance of
his car and the state in which it arrived. The rally caught the public imagination.
Sport began to play an important role in the Principality with the opening of the Monte-Carlo Golf Club in 1911, and two years later the town hosted the Schneider Trophy for seaplanes. The trend continued after the First World War when those who’d lived through the conflict celebrated life to the full. The Roaring Twenties was a time of excess and frivolity, and those who could afford it became the ‘Lost Generation’ enjoying sunshine and the high life. Sport continued to be important with the founding of Monaco’s football club in 1924 and an international tennis competition at
the newly-opened Country Club.

Monaco launched plans to attract summer visitors and a new road was laid out around the bay to the north of the casino and the Monte Carlo Beach Hotel, where several other hotels had opened. Then, in 1925, SAVM decided to rename itself the Automobile Club of Monaco (ACM) and applied to join the forerunner of the FIA. Noghes’s son Anthony was sent to Paris to try to convince the Federation that this was a good idea. The application was refused because the ACM did not host any motor racing event on its territory. There was only one way around that problem… and the younger Noghes proposed it. A Grand Prix on the streets.
The reaction to Noghes’ idea was one of complete astonishment. “They have the most astounding audacity in some parts of Europe,” wrote The Autocar. “The Principality does not possess a single open road of any length, but has only ledges on the face of a cliff.”
In France, La Vie Automobile accepted it was a novel idea, but added that: “it goes without saying that the track is made up entirely of bends, steep uphill climbs and fast downhill runs. Any respectable traffic system would have covered the track with ‘Danger’ signs.”

WORD ON THE STREET

Noghes was persuasive, however, and talked the casino into underwriting the cost of the race. At the time, Monaco had a Grand Prix driver in Louis Chiron, but he had a contract to race at the Indianapolis 500 and so could not take part in the first event, scheduled for April 14, 1929. Some of the major factory teams also turned down the opportunity to compete, but Mercedes sent a huge and powerful white SSK to be driven by its lead driver, Rudolf Caracciola. The opposition was made up of a lot of privately-entered Bugattis. The French cars were nimble and fuel-efficient and ‘Williams’, the enigmatic, pseudonymous Englishman, who had entered a British racing green-painted Bugatti, emerged as the primary challenger although Caracciola had the faster car. By virtue of some demonic driving and a better strategy, ‘Williams’ won the day, his bravura performance around the streets capping a hugely successful event that quickly marked Monaco’s race out as a unique spectacle. Other cities began to emulate what the Principality had achieved and almost overnight, Monaco became a key part of Grand Prix racing, with the event gaining notoriety around the world – among spectators and competitors alike.
In 1933 it hosted an extraordinary battle between two of the greatest racers of the decade: Tazio Nuvolari and Achille Varzi, the pair swapping the lead time after time, and the race only being settled on the penultimate lap when Nuvolari’s Alfa Romeo, run by Enzo Ferrari, overheated and caught fire, leaving Varzi’s Bugatti to win.
Grand Prix racing in the late 1930s was dominated by the Mercedes and Auto Union teams from Germany, while French interestcentred on the exploits of Bugatti in the Le Mans 24 Hours, so in 1938-39 the Monaco Grand Prix did not take place. However, its fame as a racing venue was illustrated in August 1945 when officers of the 36th American Infantry Division decided to hold a regularity trial on the streets of Monaco to improve troop morale. The war was over and the GIs wanted to go home but they had to stay for a while longer. They competed in Jeeps and GMC trucks.
The Principality was keen to revive the race, but plans for an event in 1949 had to be cancelled when Prince Louis died. His son Prince Rainier took over and organised what would be the second round of the new Formula One World Championship, just a week after the very first race had taken place at Silverstone in 1950.
Money was a problem in the austere years after World War II and so the races in 1951 and ‘52 were held for sports cars, but Grand Prix racing returned in May 1955.
The Grand Prix became an integral part of Monaco culture and the annual sporting calendar. It is the place where F1 does many of its biggest sponsorship deals. It’s the one event that everyone wants to see and every driver wants to win. The track has changed little since the 1920s, even if the city around it is barely recognisable as a result of development. The Casino and hotels remain the same, but everything else is different. The tramlines of the 1930s were taken up but only minor changes were made to the track until 1973, when a new section of road had to be built to skirt around the new Swimming Pool and an extra loop of track was added around the Rascasse restaurant, replacing the old Gasworks hairpin.
There were some spectacular accidents along the way, not least in 1955 when Alberto Ascari crashed into the harbour at the chicane while leading the race, though he came bobbing to the surface after a few anxious seconds. It happened again in ‘65 when Australian Paul Hawkins went over the side in a Lotus. He too emerged unscathed. Two years later, however, Lorenzo Bandini crashed his Ferrari in the same place and was killed when his car caught fire.
Monaco often threw up unusual results, with unexpected victories for Maurice Trintignant in 1955 and ‘58, and for Jean-Pierre Beltoise in the wet in 1971. The great Jim Clark never won the Monaco Grand Prix, but Graham Hill won an astonishing five times, gaining the nickname ‘Mr Monaco’ with his victories in 1963 – 65 and 1969. This beat Stirling Moss’s record of three victories in 1956, 1960 and 1961. Alain Prost won four Monaco GPs in the 1980s, including a wet event in 1984 when the race was stopped early as a young Ayrton Senna was catching Prost (and behind Stefan Bellof was catching them both). Senna became the dominant force in Monaco, winning six times between 1987 and 1993, while Michael Schumacher carved a place in the record books with five wins between 1994 and 2001. In modern times, both Lewis Hamilton and Nico Rosberg have claimed three victories, joining Moss and Jackie Stewart.

For most drivers Monaco remains one of Grand Prix racing’s great challenges. “Monaco is a really special place to go racing, and it’s easy to see why it’s such a famous venue for a Grand Prix,” says Fernando Alonso. “It’s one of the most technically challenging circuits of the year simply because of the level of skill and concentration you need to get around lap after lap 78 times, as well as negotiating the traffic, strategy, weather and everything else this crazy race throws at you.”
For Daniel Ricciardo, who suffered heartache in 2016 when a bungled pit-stop robbed him of victory, and delight when two years later he scored a memorable win in a failing car, it is the race that gives him the biggest buzz.
“It creates the most adrenaline and excitement,” he says. “The circuit is insane; I don’t want to say that we shouldn’t race cars on it because we should and it’s the best thing ever, but it’s crazy to think we race around the streets so close to the walls like we do. I just love the whole atmosphere, there’s a lot of intensity, and the risk and reward is the best of the year.”
But with the advent of the COVID-19 pandemic the race has had to stop. And no one has been immune to its impact, even Prince Albert II of Monaco, who after recovering from COVID-19 spoke about the need for unity. “We are enduring a major health crisis that is breaking into our hectic daily lives and that can sometimes distance ourselves from the real objectives of our existence,” he said. “Every crisis is also an opportunity. We must hope that the current global health emergency will help humankind realise the importance of global unity. During this confinement period we must envision the future and choose to travel down a path of worldwide solidarity, dialogue and co-operation.”
But despite the impact of the pandemic, Monaco will be back. It remains one of the great success stories of motor racing. It was an audacious plan, but it worked out in spectacular fashion. Others have sought to emulate that success ever since. Indeed, there is a reason that Singapore and Abu Dhabi both adopted the idea of racing around a harbour. 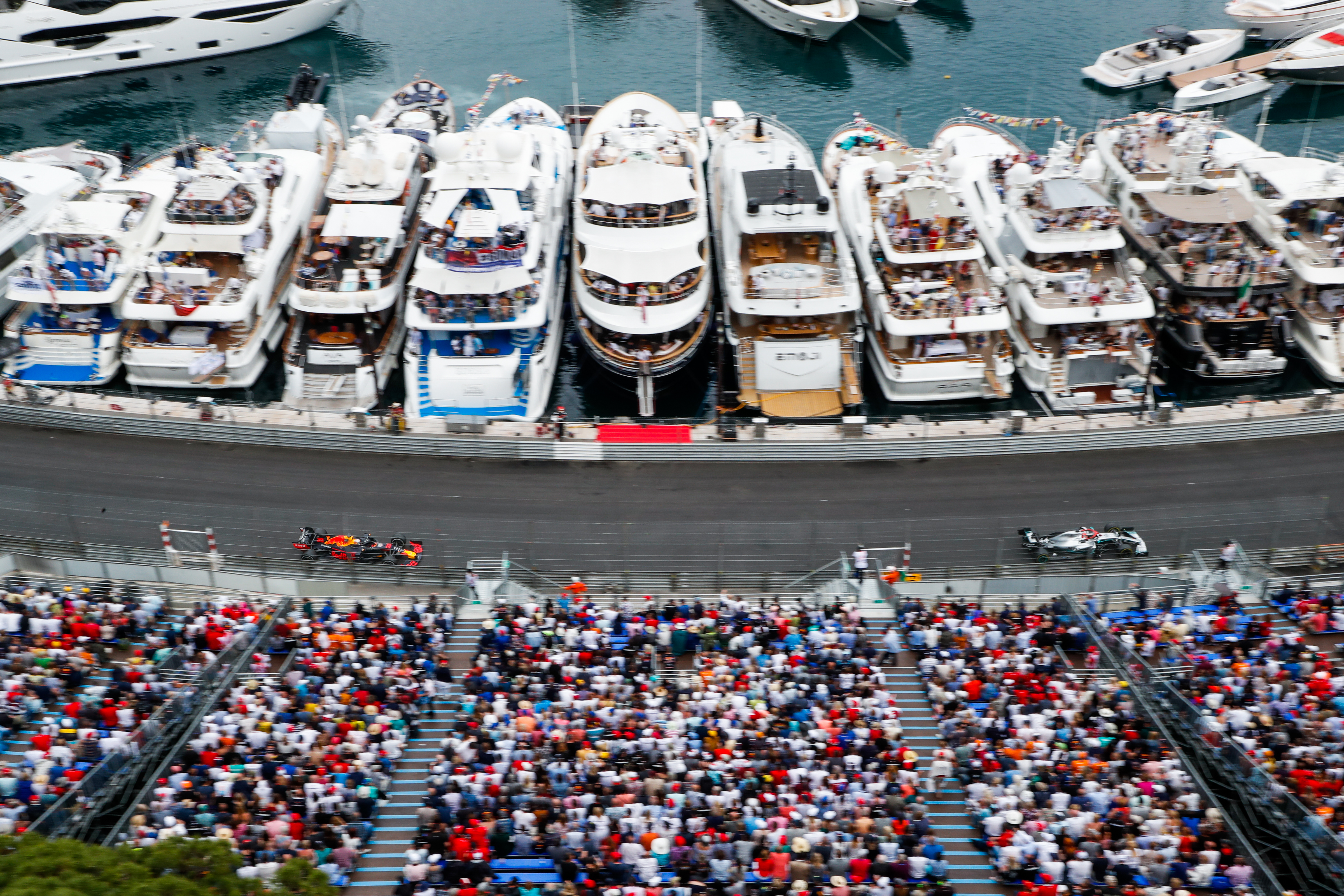